Marie Awadis, the Armenian pianist and composer based in Germany, is known for her sensitive sound. Intimate and poetic, Marie’s music aims at communicating the depth of human emotions. Always centered around her instrument, the piano, she draws influences from the life
experiences that have shaped her as a human, from deep roots in classical traditions to recurrent folkloristic harmonic elements of her native Armenia.
Born into a musical family, she stood on stage for the first time at the age of five, singing with her father’s band. As she started piano lessons, she focused on the classical repertoire and became active in performing solo concerts, with pieces from Bach to Rachmaninov and Schönberg, beside chamber music, choir accompaniments and studio projects.
Marie received her Bachelor degree in Lebanon and her studies in Germany at the Hochschule für Musik und Theater in Hannover. During her stuies, she performed with the Lebanese National symphonic orchestra and also established the duo Karma with Armenian cellis Karolin Scholz, performing classical as well as traditional repertoires. Marie started to compose and wrote her first cello duo waltz. In 2015 she released her debut solo album Echoes, followed by Searching two years later.
Since 2018 Marie is actively playing concerts in Germany and Europe, and collaborating with different artists for studio recordings and live performances. Recently, she wrote an album especially for the unique Klavins M189 Concert Una Corda, which she just finished recording and will release in 2020.

Anne Müller is versatile cellist who participates in a variety of different musical worlds. Born and raised in Berlin, she studied classical performance with Prof. Michael Sanderling at the ‘Hanns Eisler’ Academy and completed her Masters degree at the Frankfurt University of Music.  Though she is an accomplished orchestral performer and chamber musician, Anne is also active in the realm of popular, contemporary, and experimental music. Equipped with an arsenal of loop and effect pedals, she creates her special cello sound with absorbing soundscapes, a vortex of feedback, drone and glitches.
Anne Müller is also a frequent contributor to recordings on the UK-based neo-classical label Erased Tapes; here she can be found in collaboration with German Pianist Nils Frahm (7Fingers,2011) and Ólafur Arnalds (Stare, 2012). She also creates her own compositons as a solo artist, the first collection of which will be released on Erased Tapes.  2009-2014 she collaborated with Danish Singer/Pianist Agnes Obel, can be found on the records Philharmonics/Aventine and performed concerts across Europe and around the world. Anne Müller was a featured artist on Nils Frahm Music for the Motion Picture « Victoria » (Erased Tapes / German Film Awards: Best Film Score ).  Her last collaboration work was just released in Summer 2016; there she lends musician Markus Sieber’s solo project Aukai her special cello sound on his self titeld new record « Aukai ». 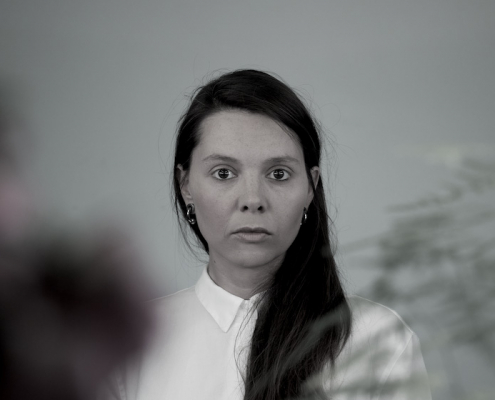 Aimée Portioli (b. 1985), known as Grand River is a Dutch-Italian composer and poly-instrumentalist producer based in Berlin. While mainly connected to the fields of electronic music and sound design, her compositions transcend these genres.
Influenced by classical minimal music, Grand River’s work integrates a large variety of sound structures and symphonic calculations in which she crafts absorbing experimental and ambient narrations combining traditional composition with contemporary sound research.
Her first release “Crescente”, was released via Spazio Disponibile in 2017 and has been named as one of the best releases of the year by XLR8R. Since then, her work has been presented in festivals and venues across the world such as Berghain, Mutek, Mapping Festival, Nachtdigital, Le Guess Who, De School, Paral·lel Festival, The Labyrinth, Funkhaus, and many more. Together with the visual artist Marco C. she sometimes presents the A/V performance called “0,13%”.
Her full-length debut album “Pineapple” followed in 2018 on Spazio Disponibile along with participations on Ghostly International and the Australian Longform Editions in 2019. In September 2020 she released “Blink A Few Times To Clear Your Eyes” on Editions Mego. Since 2016, Aimée also runs the record label One Instrument. 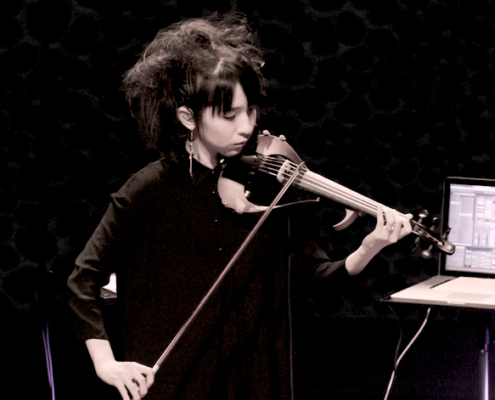 Hoshiko Yamane is a classically trained violinist and a member of the legendary band Tangerine Dream.  She’s also an accomplished composer, and whether releasing and playing under her own name or as Tukico, her unique sound features looped strings together with Moog synths and effects. Under Hoshiko Yamane would released some solo Albums from Swedish Label 1631 Recordings and She is working with Decca Publishing for Film music.  She is collaborating with many musicians and dancers,which are like contemporary dance performances. 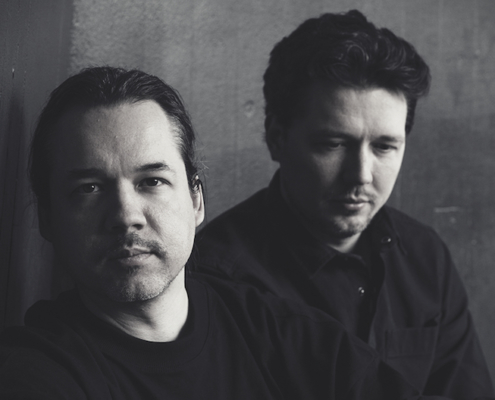 CEEYS– are the multitalented instrumentalists and musicians Sebastian and Daniel Selke. Combining a shared passion for music and an impressive resume working alongside fellow  luminaries Ólafur Arnalds and Peter Broderick, they just released their latest album HIDDENSEE in 2019. Their 4th duo production again quickly amassed an organic following of listeners and got acclaim from tastemakers like Mary Anne Hobbs and BBC Radio 6:

“It’s an extraordinary piece of music. It’s the work of two brothers, Sebastian on cello and Daniel on piano, and together they play as CEEYS. I saw them premiere tracks from their new album at a gig that I went to very recently in Berlin. This is a project which is written about the buildings that surrounded them in their childhood, growing up on the streets of East Berlin. »

They already started planning the 4th edition of their up and coming Q3Ambientfest – a music happening for contemporary music, 2020 with a mesmerizing collaboration from CEEYS w/ Peter Brodericks and Daniel O’ Sullivans latest duo project CONSTANT PRESENCE. Live on stage, this performance follows their ambient album on Thesis Project released in the form of a 10 inch vinyl with handmade artwork by Gregory Euclide. 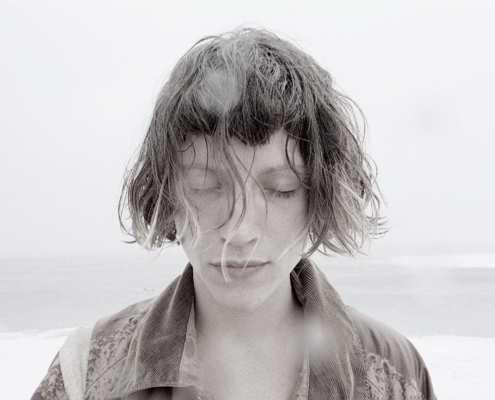 Diane is a sound artist and researcher based in Berlin. With a classical training in traverse flute and violin in French conservatories, she soon began to experiment with electronic instruments and field recordings to widen the narrative possibilities of her practice. The key, for her, is to delve deeper into the realm of sound –beyond our hearing range, beyond acoustic waves– to create music as a meditative, environmental  experience.

Diane currently works as a recordist for documentaries and is finished a degree in Sound Studies at the University of Arts in Berlin (UdK). Until its closure in 2019, she hosted the feminist music and political talk show Hystereo on Berlin Community Radio. Diane has performed live in festivals and sleep concerts across Europe and the US, with a particular predilection for outdoor settings where « sound trap » microphones complement her setup. She released a cassette of live performances called The River by the Tree with the experimental label Jungle Gym in early 2019.

You can find out more about which cookies we are using or switch them off in settings.